I worked on this recipe for some newspaper columns I wrote about 15 years ago and then forgot about it. I was going through all of the old files on my computer and found this one and thought it was time to make it again. Gosh, that was a great decision!

Back then I called it a Spinach Pie, but when I looked at it again, I decided to rename it. Instead of making a pie crust, I use phyllo dough and the filling is made with spinach, onion, garlic, feta, ricotta, and eggs. Very Spanikopita-ish. Adding milk and cream to the eggs turns it into a quiche. (If you like dill in your spanikopita, add some chopped fresh dill.)

I will definitely be making this again — and I will not be waiting another 15 years to do it. Serve with a salad for dinner or add it to a brunch buffet; this one is a keeper. 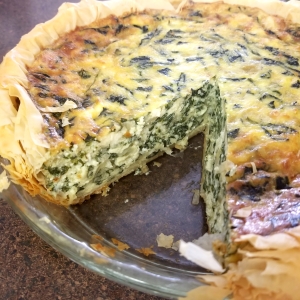 Crispy layers of phyllo form the crust of this light, flavourful spinach and cheese quiche.

Continue with the remaining sheets until the crust is an even layer around the entire pan. Brush the final layer with melted butter.

©2006 – 2023 Pamela Reiss. All rights reserved. This material may not be published, broadcast, rewritten or redistributed without permission.