I’ve been thinking about the latkes I’ll be frying for Chanukah this year. I spend days and days making latkes. As often happens, when I start thinking about a holiday food it brings back memories of the foods I enjoyed as a kid. I grew up with traditional foods prepared by my mother and grandmothers and though I will always love them, I also like throwing new twists at old favourites.

As I was thinking about using sweet potato, leeks, zucchini, mushroom and maybe some blue potatoes in latkes, the blue potatoes reminded me of my Baba’s (grandmother) blue latkes. No, Baba didn’t use blue potatoes like I was planning. Her pancakes were made from red, waxy potatoes that had turned a purplish-blue as the starches oxidized after they were finely grated. Some people add white vinegar to the potatoes to stop the oxidizing but I always grate the onions first and let their juices keep the potatoes from discoloring. Baba went au natural and we ate them as they were — and loved them! But, if I want blue latkes I’ll use those blue potatoes.

Here are a few of my favourite latke recipes. While I love, love, love potato latkes, it’s nice to have a few variations to have throughout the holiday. Try one or all of them.

Remember – Chanukah is a holiday that calls for eating things fried with oil. So I use oil to pan-fry all of the latkes. If you are looking for a lighter version, you can spray a non-stick frying-pan with vegetable spray – but be warned – the results will not be the same. For crisp on the outside, soft on the inside latkes use the oil. (You are commemorating a miracle!)

Some latke pointers that I shared a couple of years ago and thought it’s time to share again:

Grate the onion first, then grate the potato and mix them together. Squeeze out as much liquid as possible from the onion/potato mixture and place in a mixing bowl.
Add the eggs, cake meal, salt and pepper and mix well.
Heat ¼-inch | 5-mm of oil in a large frying pan over medium heat. Use two spoons or an ice-cream scoop to gently place batter into the oil (use about 2 Tbsp. | 30 mL of mixture for each latke).
Fry for about 4 minutes, or until the edges start to brown, then turn over and cook another 3–5 minutes until both sides are golden brown.
Transfer to paper towel to drain. Continue frying the rest of the latkes, adding more oil if necessary.
Enjoy on their own or with sour cream or applesauce.
Makes 12-16 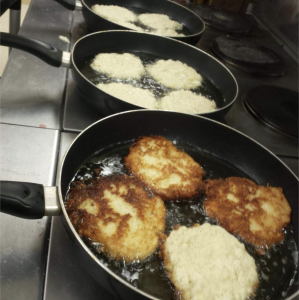 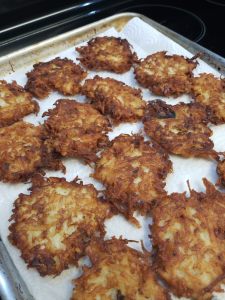 I’ve seen young children who may not enjoy vegetables gobble these up. They’re a little softer than potato latkes, so be gentle when you flip them over.
Grate the zucchini and potato and squeeze out any excess liquid. Combine with the remaining ingredients in a mixing bowl.
Heat ¼-inch | 5-mm of oil in a large frying pan over medium heat. Use two spoons to gently place the mixture into the oil (use about 2 Tbsp. | 30 mL of mixture for each latke).
Fry for 2–3 minutes, or until the edges start to brown, then turn over and cook another 2–3 minutes, until both sides are golden brown.
Transfer to paper towel to drain and continue with the rest of the latkes, adding more oil if necessary.
Makes 16-18 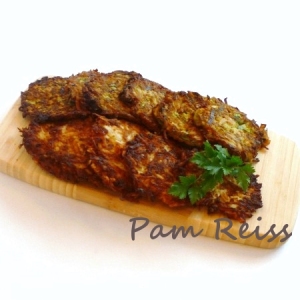 Sauté onions for 2-3 minutes in oil over medium heat. Add sliced mushrooms and cook until the mushrooms have released their juices and are cooked through, about 10 minutes. Drain and cool.

Place the cooled mushrooms and onions in a mixing bowl and add the salt, pepper, eggs and flour. Mix well.

Heat oil in a frying pan and carefully spoon heaping tablespoons of the mixture into the oil. Fry for 3-5 minutes on each side until golden brown and set.

©2006 – 2023 Pamela Reiss. All rights reserved. This material may not be published, broadcast, rewritten or redistributed without permission.